[english] – This report is mostly based on eye-witness accounts and discussions with protesters in Hong Kong over the past week. It describes the latest escalation of the protest movement’s struggle against the Hong Kong government and police and the “saam baa” or “three strikes” actions in mid-November 2019: workers’ strike, class boycott, closure of businesses. For accounts of earlier developments see Out of Control – Hong Kong’s Rebellious Movement and the Left and Not just ‘black bloc’ – Escalation and Perspective Distortion in Hong Kong. 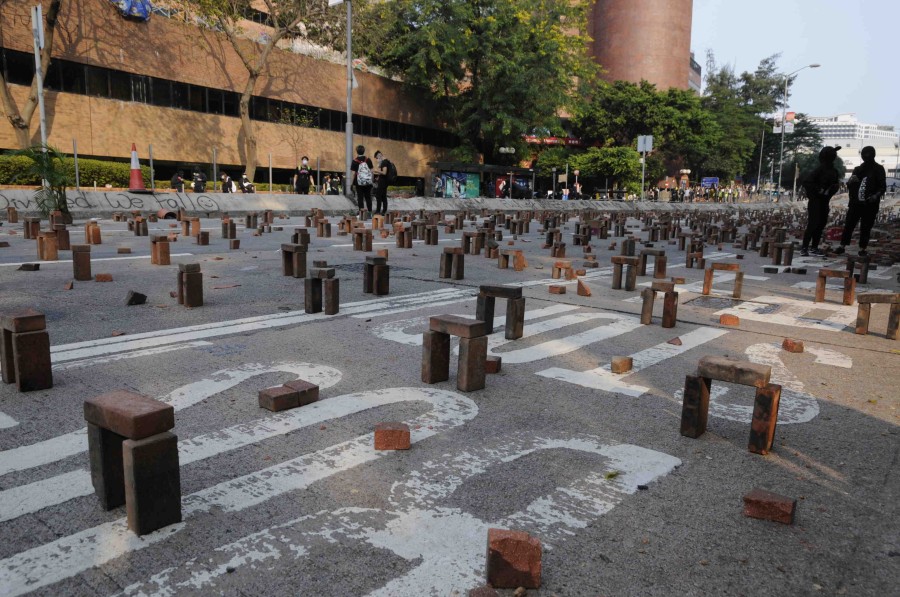 On Saturday, unarmed soldiers of China’s People’s Liberation Army cleared street barricades close to Baptist University that had been erected by protesters in the past days – the first know deployment of the Chinese army in connection with the protest movement. After a turbulent week, the situation calmed down slightly on Friday and Saturday. While protesting students gave up the occupation of Chinese University in Shatin on Friday evening, the clashes concentrated around other barricaded universities and Mongkok which has seen repeated confrontations and tear gas attacks recently. On Sunday, the police used armored cars, water cannons, teargas, and rubber bullets to attack Polytechnic University in Hung Hom, apparently the last occupied university that has been heavily barricaded and was defended by hundreds of student protesters. In districts nearby, other protesters erected barricades and fought with security forces. Until Monday morning, the police was not able to take over Polytechnic University but surrounded it – with presumably hundreds of protesters still inside.

The new escalation of the past week is connected to events the week before. On Friday, November 8, a 22-year old student died after he had earlier fallen down a floor in a building during a police attack. On the same day, it became know that a 16-year old women had been raped by several police officers after her arrest. The police denies the allegation. Heavy clashes between security forces and the “black bloc” followed during the following weekend. On Monday, November 11, a “general strike” and traffic blockades had already been planned. After an attempted street blockade, a policeman shot two people in Siu Sai Wan, one of whom seriously. In Kwai Tong, a traffic cop on a motorcycle repeatedly drove through a group of protesters and seriously injured one person. On Tuesday, police forces tried to enter Chinese University in Shatin through a bridge after protesters had thrown objects on the highway underneath. For hours, the police shot teargas – all in all well more than 1.000 rounds – and rubber bullets while the protesting students defended themselves with Molotov cocktails and more.

These events mobilized many for the actions planned for Monday, Tuesday, and Wednesday last week under the slogan “saam baa” or “three strikes” – workers’ strike (baa gung), class boycott (baa fo), and the closure of businesses (baa si). Starting in the early morning, protesters blocked Hong Kong’s subway or MTR (in leaflets also called “empty R”), used by millions daily to get to work. At the same time, many streets were blocked so that the traffic broke down in many places and buses could not get through either. Many people in Hong Kong did not get to their work places (or arrived late), some office workers were asked to work from home, others used the chaos to have a free day or take part in protests.

In Central, the banking- and business district, thousands of office workers took part in illegal demonstrations and street blockades. Several times in the past weeks, masked office workers had staged protest demonstrations in the morning from the subway to their work places in office towers. Most of them are young, so they belong to the masses of those who get a (precarious) job after their studies or work training but they cannot afford renting their own flat. In the past week, they met during their lunch break at a junction on Pedder Street, waited until they reached a critical mass, and then occupied the street, blocked the traffic, built barricades from rubbish bins and construction materials or dug up paving stones and piled them up to the meanwhile characteristic “mini-Stonehenges” in order to prevent police vehicles from advancing. On some days, the police attacked them and made arrests.

Less successful was the call on shops and restaurants to close during the days of the “general strike.” During the past weeks, protesters had begun to make lists and maps with shops and restaurants that support them (“yellow”) and those who stand on the side of the government and the police (“blue”). In several districts, cues of people supporting the movement have formed outside “yellow” places while “blue” ones have been boycotted and face attacks during clashes. On Monday, several “yellow” restaurants closed and hung up solidarity declarations, but most restaurants and shops stayed open.

High-school and university students have belonged to the core and motor of the movement in the past months. On Monday, they staged class boycotts in many schools and universities, and after the police attack on Chinese University several other universities were occupied on Tuesday and Wednesday. In Polytechnic University, Chinese University, and City University masked students in black began to collect materials for the defense against expected police attacks. They built brick walls, prepared cases of Molotov cocktails, and barricaded roads and bridges leading to the campus. Many people came from outside and brought them needed gear like helmets, gas masks, and umbrellas as well as food, clothes, and more. The campus exits were now guarded, bags checked, and only students, some supporters, and journalists could enter. Since the city government first suspended class and later declared that it would end the semester immediately, many university employees left the campus. Students and supporters took over some of the canteens and other university facilities. The early end of the semester also meant that many students (including those from China) packed their suitcases and left, partly out of fear that the police would attack. Around the university campus, protesters built more barricades and sealed off roads. Close to Chinese University, a highway was blocked, and next to City University a highway and the entrance to the Harbour Tunnel, one of the main traffic arteries in the city.

Uprising in the Districts

It is notable that for weeks militant demonstrations and blockades have also taken place in Hong Kong’s suburbs. That is partly due to the frequent closure of the MTR in the evenings. The subway company became a target of the movement in the summer when it started closing subway stations in “riot” areas following police orders as it made it more difficult for protesters to escape. Since then, exits, ticket machines, and whole stations have been destroyed. The closure in the evenings means that many people cannot reach the city center anymore. Activists reported that local communication structures have consolidated and more local actions have been organized since. Among these rebellious districts are Tuen Mun, Yuen Long, Sheung Shui, Tai Po, and Tung Chung where also many workers from poorer parts of the population live. During local actions some of them join the high-school and university students of the “black bloc.” In Yuen Long, for instance, last week several blockades of the main shopping street took place, when hundreds destroyed facilities of the light rail system as well as Chinese banks and shops. The police attacked them with teargas, cleared the barricades, and went back to the police station, but the protesters frequently came out again.

Still Broad Support for the Movement

The “saam baa”-actions were so successful that they were continued on Thursday and Friday. After the two-million-march on June 16, the parliament storm on July 1, the attack by triad members on protesters in Yuen Long on July 21, the “general strike” on August 5 and the severe clashes on the 70th anniversary of the founding of the People’s Republic on October 1, the past week is another culmination and probably turning point of the movement. It is still supported by large parts of the population that sees the “black bloc” as the front line of a legitimate uprising. The increased repression and brutality from the side of the police plays a big role here. More than 4,000 people have been arrested so far. About 40 percent are high-school or university students. Many of the arrested report beatings and acts of sexualized violence by police officers. Minors have been sent to foster homes for weeks as a punishment. Most demonstrations are banned, and participants risk years in prison. Still, thousands ignore this regularly, and even the ban of masks declared in early October is largely ignored. In the eyes of many people in Hong Kong, the police as well as other state institutions have lost their legitimacy.

The clashes have also led to a deep division in the society as a part of the population has sided with the city government – and therefore with the right-wing government of the Chinese Communist Party (CCP) in Beijing which controls the government in Hong Kong. In the past few weeks, groups of these “pro-Beijingers” have helped cleaning streets after clashes and organized smaller demonstrations. Frequently, violent fights break out between individuals or smaller groups with injured on both sides. On November 11, for instance, a “pro-Beijinger” was spilled with an inflammable liquid and set on fire, and one day later a 70-year old was hit by a brick thrown by a supposed protester. The old man died later.

What has developed in Hong Kong in the past six months is not just a movement but a popular uprising against the governments in the city and Beijing. The increasing intervention of the authoritarian regime China’s, police repression, and the refusal of the city government to fulfill the demands of the protesters – no charges against them, an independent inquiry into police violence, and “free” elections – have led to the escalation. Representatives of the CCP leadership still declare that the protesters were “terrorists” and “thugs” and the movement was controlled by “black hands” of the CIA.

The uprising is no revolution as the exploitative capitalist relations are not questioned and the movement’s demand stay largely reformist so far. However, the broad self-organization, the refusal of representation (by politicians or others), and the solidarity networks that carry the movement undermine existing social structures at some points and make way for new social connections. Left-wing activists underline the “collective intelligence” that shows up in the movement’s structures and communication and push it forward. Problematic are still the racist positions of parts of the movement, above all against migrants from China. However, there are anti-racist tendencies in the movement, too.

Still unclear is, whether protesters in Hong Kong will see more connections with the current wave of uprisings around the globe. So far, mostly references to the Yellow Vests and the movement in Catalonia have been made. 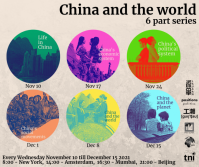 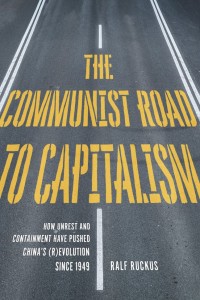